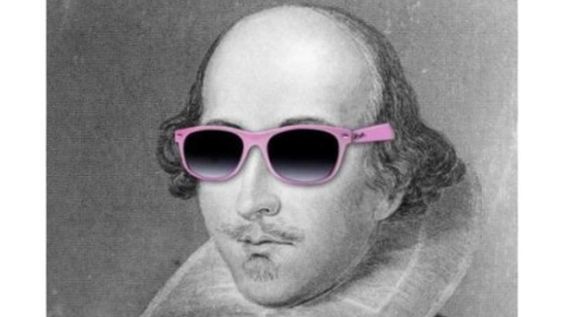 With any sort of artistic creation, particularly those that one hopes to show to the world and maybe make a bit of a living off of, there always seems to come up the question of how relatable the work is. Does it speak to the audience on a personal level? Do they feel drawn in to the work? Can it run parallel to the lives of the audience? These can be very important artistic questions, but recently it feels like these questions (or perhaps certain answers: “yes yes yes!”) have taken large portions of artistic critique and development hostage. It seems like nothing kills art faster than a casual “it’s not relatable” or “it’s not relevant,” and that’s terrible.

It didn’t take long for a slew of articles to pour out dissecting Glass’s claim that Shakespeare sucks, most of which happily concluded that he was wrong. Many focused on pointing out how Shakespeare could be relevant, how it could speak to the human condition, etc. etc. Rebecca Mead, however, took a different approach in her New Yorker article The Scourge of “Relatability” and attacked the notion of “relatabliliy” being an effective yardstick for artistic criticism or legitimacy.

What are the qualities that make a work “relatable,” and why have these qualities come to be so highly valued? To seek to see oneself in a work of art is nothing new, nor is it new to enjoy the sensation. Since Freud theorized the process of identification—as a means whereby an individual develops his or her personality through idealizing and imitating a parent or other figure—the concept has fruitfully been applied to the appreciation of the arts. Identification with a character is one of the pleasures of reading, or of watching movies, or of seeing plays, though if it is where one’s engagement with the work begins, it should not be where critical thought ends. The concept of identification implies that the reader or viewer is, to some degree at least, actively engaged with the work in question: she is thinking herself into the experience of the characters on the page or screen or stage.

But to demand that a work be “relatable” expresses a different expectation: that the work itself be somehow accommodating to, or reflective of, the experience of the reader or viewer. The reader or viewer remains passive in the face of the book or movie or play: she expects the work to be done for her. If the concept of identification suggested that an individual experiences a work as a mirror in which he might recognize himself, the notion of relatability implies that the work in question serves like a selfie: a flattering confirmation of an individual’s solipsism.

To appreciate “King Lear”—or even “The Catcher in the Rye” or “The Fault in Our Stars”—only to the extent that the work functions as one’s mirror would make for a hopelessly reductive experience. But to reject any work because we feel that it does not reflect us in a shape that we can easily recognize—because it does not exempt us from the active exercise of imagination or the effortful summoning of empathy—is our own failure.

Shortly after, Derek Thompson rebuffed Mead’s article by writing The Power of Relatability in The Atlantic:

Relatability might be a neologism, but like a King Lear play set in 21st century Washington, D.C., it merely puts a modern dress on an old idea. Many of the best plays have—and still do—relate explicitly and purposefully to their contemporary audiences. It wasn’t by accident that Oscar Wilde repeatedly skewered the upper-crust of Victorian society and became beloved for it. After all, his audience was upper-crust Victorian. It wasn’t coincidence that Shakespeare, writing for an audience that often featured sitting English monarchs, wrote 10 plays about former English monarchs.

If you don’t like relatability, you’re going to hate the history of American theater, which has been steadfastly devoted to writing plays about typical Americans, living in typical America. Long Day’s Journey Into Night is nearly autobiographical and, famously, scarringly relatable to any family that has suffered from a form of addiction; Angels in America and The Normal Heart took on the AIDS crisis at the height of the AIDS crisis. A Raisin in the Sun? Death of a Salesmen? These aren’t exactly Mesozoic dramas. The Crucible might be the most famous American play that isn’t about contemporary American life, but as a metaphor for America in the Cold War, its politics couldn’t be any more current for its contemporary audience.

The point isn’t that great art has to be about contemporary life. I’m not sure great art has to be anything. But so much wonderful theater has served, historically, as an exaggerated mirror held up to a country at a specific moment in history that it’s shocking to see a writer blast the idea that “[a play] be somehow accommodating to, or reflective of, the experience of the reader or viewer.” Ira Glass did not invent the idea that great plays ought to reflect their times.

I find Mead’s argument more interesting (or, perhaps, more “relatable’). Yes, Thompson is correct in pointing out that Shakespeare wrote plays that featured English monarchs for English monarchs, but the vast majority of his audience was, in fact, the groundlings. Theater was a popular form of entertainment across classes, and his use of language simultaneously balances poetic verse, innovate new words, and baudy humor to keep everyone listening. The fact is, Shakespeare wasn’t just good at making his plays relatable because he felt the need to speak to the human condition, Shakespeare had to keep his audience satisfied to make his living. To bore the groundlings could result in verbal (or physical) abuse of the actors, to displease the nobility could result in losing commissions, funds, or your head. Shakespeare didn’t just relate, he pandered. He pandered unabashedly. There’s plenty of interpretations that indicate Shakespeare was putting in some subversive themes and suggestions between the lines, but that probably wasn’t what made his plays popular at the time. This isn’t to say that making things relatable is bad, but it shouldn’t the be-all and end-all goal of art. Art doesn’t have to play on the personally relatable to be emotional, or meaningful, or just plain interesting. The things that have made Shakespeare last are the broad sweeps, not the specifics. Plays like Angels in America and even the majority of Tennessee William’s work are captivating and powerful, but it’s not like we can say that the majority of people truly have experienced what is happening in these works. What makes many of these plays interesting is how they take topics that were not being talked about, that most people did not relate to, and talked about it anyway. I do not pretend to say I relate to the pain of an AIDS affected gay man, because that’s not who I am, but why should I need to relate to find the story interesting? Why should I need to relate to that experience to feel compassion? To try and boil down these experiences into relatability just further commercializes them. Consider bell hooks concept of eating the other: “where white individuals literally ‘consume’ images and representations of racialized others in order to feel pleasures. She claims that within this ideological structure, privileged white individuals act ‘on the assumption that the exploration into the world of difference, into the body of the Other, will provide a greater, more intense pleasure than any that exists in the ordinary world of one’s familiar racial group.'” (Critical Media Studies: An Introduction, 1st Edition, 145)

In his New York Times opinion piece To Vibrebrate: In Defense of Strangeness Johannes Göransson rejects Matthew Zapruder’s Claim that “superficial introduction of confusion is not how great poetry is made, nor how we’re brought closer to what is most difficult to say.”

Not all poems prioritize everyday language. Some poems value arguments and narrative above the experience of language. Sometimes poems have mystical meanings. Zapruder rejects reading poems as riddles, but some poems are indeed riddles. While Zapruder argues that students are turned off when poems are treated as riddles, I have found the opposite to be true. Often students love riddles: they create the sense that words may not mean what they are supposed to (thus flouting his maxim that “One of the great pleasures of reading poetry is to feel words mean what they usually do in everyday life”). Riddles create a sense of mystery.

To further frustrate Zapruder’s binary, the riddle, with its ‘hidden’ meaning, is often keenly language-driven. Poems can be gorgeous precisely in their riddle-like mystery….

Masks and “disguises” are fascinating, and they can also be politically volatile. Masks unsettle identity-based hierarchies: the king might really be a pauper. I think about Raúl Zurita’s Purgatorio (trans. Anna Deeny Morales), the opening of a decades-long poem of resistance to the 1973 Chilean coup. The sequence opens with an image of Zurita’s ID papers coupled with a little poem that asserts that he’s in fact not at all Zurita, but the sex worker Rachel: “my friends think / I’m a sick woman / because I burned my cheek,” he writes (in Deeny’s translation), literally masking or disguising the biographical fact that, upon being released from prison, Zurita burnt his own cheek—an action he took to overwrite/memorialize his torture at the hands of government thugs. This single couplet and its accompanying image wears many masks, many disguises, many disfigurements, many defacements.

There’s another politics at play in the demand for the “straightforward,” one that is personal to me. As an immigrant, I know how beautiful a foreign language can seem when it mingles with your “native” language, or when you only half understand it, or how certain words take on multilingual echoes (The sound of the English word “barn” in Swedish means “children”). The idea that poetry—or language in general—is ever “straightforward” seems impossible to my immigrant ears and eyes.

But I also know how incredibly political foreign languages are in the current moment. All over the U.S., conservative protests insist we need to speak “English only.” Why? Perhaps foreign languages act as “disguises.” We don’t know what those foreigners might be saying; perhaps they are plotting revolutions in those weird words. But I think the opposite is also true—what foreign ideas, languages, and syntaxes is the immigrant masking with their English? A foreigner can never be “straightforward.” There’s always another language mingling with the English, deforming it, transforming it, constantly shifting it. And vigilant people across the country guard against any accent, any slip-up as a sign of a foreign threat.

People love riddles, they love curiosities, they love unlocking patterns. Sometimes those patterns are those that are personable – the seemingly everyday moments of life we all cherish – other times those patterns are bizarre or inscrutable. Sometimes it is the very breaking of the everyday pattern that intrigues us. I do not subscribe to the belief that art should have “meaning,” but I also dislike that which is proclaimed to be “meaningless.” What I enjoy about art is its ability to be utterly unexpected even when it is being mundane or “personable.” I like that art can simply be interesting, relatable or not.