I knew when I started these reviews that  I was going to end with videogames. The thing was, I had just beat two Telltale series (Tales From the Borderlands, and The Wolf Among Us) and thought that I would have one other game finished by the time I wrote this last section. Things were looking grim for awhile, all the other games I’ve been playing are very long and I haven’t had time to finish them. Then, in a holy beam of light, Kentucky Route Zero Act IV descended from the heavens to grace our Earthly senses. So, let’s talk about some games, and don’t worry, I’m saving the best for last.

Tales From the Borderlands

This was my first Telltale game series, and I loved it. Before playing Tales From the Borderlands I had played the first Borderlands game, a little of the Pre-Sequel, and had absorbed a fair amount of the second through memetic fusion (though I started playing Borderlands 2 more recently). Despite my somewhat limited knowledge of the Borderland Universe I found the game very enjoyable. Say what you will about the move-as-game method of their creations, Telltale has become the master of minimalist narrative game design.

What I enjoyed most about Tales was its ability to blend a variety of disparate tones into a delicious genre smoothy. Most of the time the game makes good use of the trademark Borderlands humor – sarcasm, crass remarks, and gratuitous gore are abundant – but the game managed to surprise me with its ability to shift seamlessly between action, comedy, touching character relationships, and moments of heart-wrenching sadness. It doesn’t like to say it, but Tales is really an epic game. In scope if not it tone. 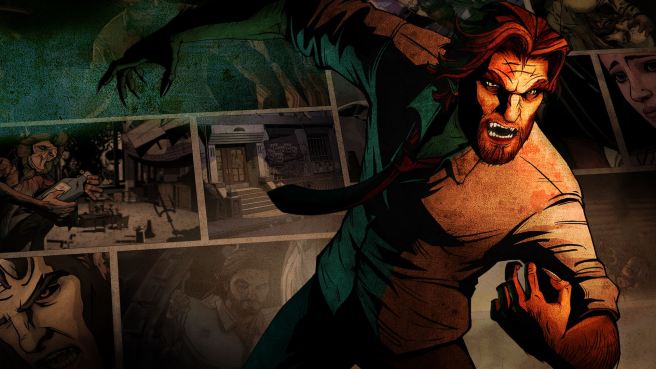 I got Tales From the Borderlands and Wolf Among Us at the same time, so I started Wolf almost immediately after Tales. I’ve read the first book of Fables, the comic book that Wolf Among Us is based on, so I was intrigued to see how they adapted it into a game.

The game’s greatest strength is its consistency of tone. It not only inhabits the grit and shadows of noir, it rules them. The integration of fairy-tale powers and characters into the detective story is effective, but the game sometimes suffers from its linearity. All Telltale games are pretty linear. Choices aren’t so much about changing the direction of the game world, more about the relationships between characters. Nonetheless I got a little frustrated with the amount of quick-time events in Wolf that apparently had no positive outcome. The game’s dedication to the dark “no happy endings” tone forces its hand into punishing your character. There are events that are meaningless, but they feel superficially meaningless and less like the game is teaching you a harsh lesson about the reality of the game world. There are times where your character will get a beating, the game prompts you to press a key really fast, but even if you get the meter nothing changes.

The ending also left me a little disappointed. Again it felt like they were so desperate to fulfill the tone they had carved out for themselves that they didn’t deliver on a satisfactory conclusion to the actual mystery of the plot.

Wolf Among Us is still good. The characters are fantastic, the setting fleshed-out, and there are plenty of scenes that will stick in my memory. When the tone works, it works flawlessly, but when it begins to force your hand it can become frustrating.

Words cannot express how excited I was to learn that Kentucky Route Zero had finally released its fourth act. I got the game when it had three acts, so I had dined gleefully on its modernist magical-realism melancholia only to be left wanting more. For a long time I was exasperated that Act IV was so long in the making, but no that I’ve played it I just can’t be mad. This act is so … not different … but almost evolved. There’s a sense that they earned the hiatus, a special polish here. Scenes are unique in ways that stand out, even in a game that’s almost exclusively composed of individual, beautiful moments.

I can’t spoil anything here (though its not like I’ve talked much about plot for any game here) because, well, its a game that should be experienced. Kentucky Route Zero has a sort of beauty that makes it, in my mind, some sort of “great American video-game.” It can be played and replayed and examined and dissected. It can be enjoyed for the mere experience, but it can also be enjoyed for its structure, its quality, and its craft.

It’s been awhile since I’ve played the first three acts, so maybe my memory is hazy, but I think that Act IV has a lot more variety to it. I mean this in the sense of options regarding how scenes play out. Kentucky  has notoriously beautiful yet mechanically pointless decisions. It’s all about dialogue, all about choosing who the characters are. In Act IV there’s a greater emphasis on not being there to play every possible scene. Almost every time you shift to a new scene you have to choose between two locations with different characters, so if you really have to decide which characters you want to watch interact when you choose your scenes. I also get the sense that there’s even more emphasis on the aesthetics of location (very important since the game inhabits a land of psychogeography). The way the camera slowly pans around a boat, or how it follows slowly behind characters into a tunnel, there’s a real sense of presence to the camera. A presence that adds weight without becoming a burden. There’s also more dialogue – like, a lot more dialogue – going on here. Words and phrases are rolled into artful little packets like paper into origami. Sometimes I just have to lean back and enjoy the essence of a paragraph, or taste the words by speaking them out loud.

Once the fifth act comes out I may do a longer piece on Kentucky Route Zero, god knows it deserves it, but for right now all I can say is that Act IV hasn’t disappointed me. I feel satisfied with this course, but I still await dessert with anticipation and hunger.

[EDIT: because I can’t seem to caption my images right now I will be linking the image sources below]